Whale Sharks and a Planet in Peril

I recently returned home from an incredible trip to Mexico to visit the migration of Whale Sharks.

Off the coast of Mexico is a small island called Isla Mujeres, where once a year between June and September hundreds of Whale Sharks congregate to feed on the plankton rich waters. Covering an area of 7 miles they gorge themselves day after day.

Swimming with this beautiful, majestic species was one of the most humbling and incredible experiences of my life. 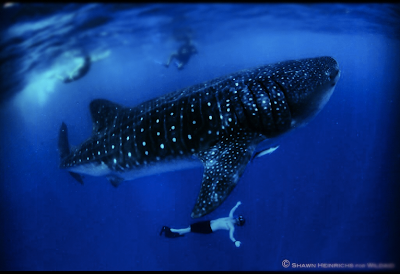 Early in the morning we hopped on a boat and headed out to the deep ocean for about an hour. Arriving at the location one could instantly see dozens of fins breaking the waters surface. Growing to up to 40ft in length they are a real sight to see. A mixture of excitement and anticipation fills the body and the thought of jumping in with them makes you a little anxious. Having now been through that experience, i now know all the nerves were completely unnecessary.

That creature couldn't have been more gentle. Their 20 tonne weight gracefully glides through the water effortlessly, gulping huge mouthfuls of water as they go, filtering out the plankton. Their species originated around 60 million years ago and are so heavy, they rival many of the large dinosaurs in weight. But i couldn't have felt more comfortable. Not at one point did i feel threatened of scared. 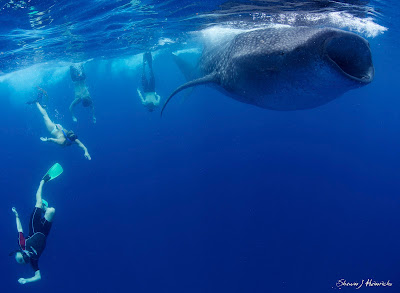 You can swim along next to them, under them and over them and they don't even bat an eye lid (if they've got one! ;)  I swam deep down about 30 ft and rolled onto my back, looking up at the huge dark shadow above me. I spread my arms and swam underneath it's graceful presence, mirroring its form. It was so humbling and awe inspiring!

These experiences are wonderful but in a world filled with human immaturity, it saddens me to say these incredible beasts are being slaughtered for their fin. A Whale Shark fin will sell for around $50,000 and is used for shark fin soup. Shark fin in soup adds no flavour whatsoever. It is basically a thickening agent and a sign of stature on some parts of the world. 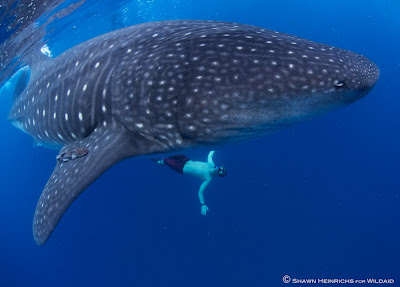 There are small villages in the world that kill one of these creatures every 6 months to feed an entire village and although this still seems brutal, it is easier to justify. The mass slaughter of this magnificent creature to supply roadside restaurants is one that has to change. 70 - 100 million Sharks a year are killed for their fin and the stability of the Oceans has already been effected. How can we justify this with all the knowledge the modern world affords us?

To think that species that have been around for millions of years can be wiped out in mere centuries is unfathomable. We must all help to get the message out that this is not something we will tolerate. If not for the Sharks sake, then for ours. The very fabric of the web of our planet is being weakened, one species at a time and it is up to individuals act if no one else will. My way of doing this is to share what i have learnt with you and hope in a way it will inspire you to make more of the world we live in. 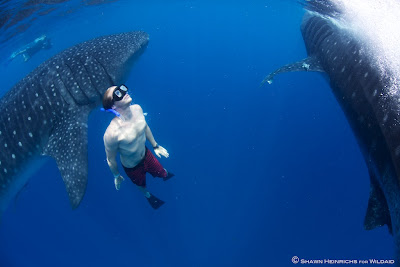 I have been lucky enough to have had this experience and be humbled by it. I Hope that you have enjoyed me sharing it with you. If you ever get the chance, jump at the opportunity to see this magnificent creature up close and  if not then i hope i have given you a small window into the life of an incredible creature!
Posted by @sambranson at 00:13

Email ThisBlogThis!Share to TwitterShare to FacebookShare to Pinterest
Labels: featured